We made our first to Kome island last weekend almost two years after our first thoughts about  working there. It was great to see some of the communities we’ll be working in. It was also great to see the clinic and pharmacy that have been set up on the island and think a bit more about the work we’ll be doing there. We went to a local church on the Sunday and got to experience some of the local hospitality. It’s a good thing we’re a fish loving family!

Kome is lovely and peaceful. In Mwanza, between the night-time parties, dogs barking all night and the calls from the surrounding mosques, I feel like I never actually sleep! I’m not sure I really slept anymore on the island, but it was lovely to wake during the night and hear nothing but insects, until the birds and other animals began to wake. It’s a bit of a shock getting back just in time for Ramadan, as there are more calls and for a lot longer. The mosques project some of their sermons through loud speakers. It continues till late and starts at 4am.

We are renting a house on Kome. We visited the property on Saturday with the intention of using the house as a base for our 4 day trip to the island. Unfortunately on arrival it was obvious that although a lot of work had been done to make the place habitable it was very much still a building site. We were able to find a guest house for £2 a night instead!

The location of the house is pretty idyllic, overlooking a sandy beach on the southern shores of Lake Victoria. You quickly get used to the smell of drying fish which the local women spread out to dry in their thousands on the sand, raking them constantly. Having a house in the heart of a fishing community will give us a real insight into how the community works and we should get to know many of the people being served by the projects in the village just by living alongside them.

Our first visit to the house on Kome Island

The beach close to the house on Kome Island 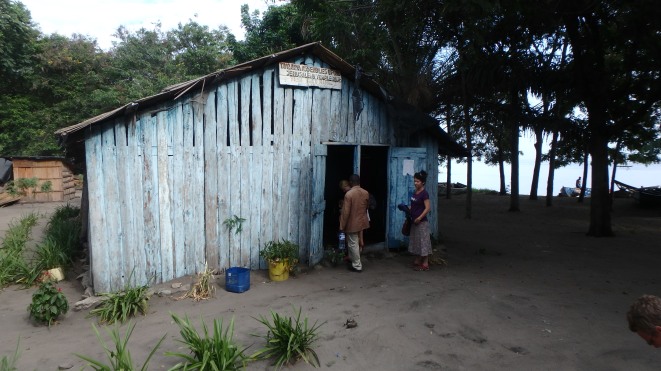 We drew a fair amount of attention on the island! During the few days we were there, we had a pretty much constant audience. The local children were very happy to hang in through the windows of every building we entered in order to maintain a constant watch on what we were doing, even if that was sitting still and resting for an hour. We can live with that while out in public, but thinking about setting up a life for ourselves on the island, we’d appreciate a space where we can sit and eat without having an audience. Therefore we have decided to have a simple fence around our property.

Some aspects of setting up a house within the community make us a little uncomfortable, especially considering some of the modifications being done to the house. Although not something we asked for, those modifying the house have taken it upon themselves to install electricity. They obviously felt that was something we needed. It looks like none of the neighbours have electricity, so we are already standing out as ‘rich’, but that will be more obvious when we park our shiny prado on the driveway. We would be happy with a basic but secure house, but we probably need to accept we won’t exactly fit in no matter what we do. No-one has running water and that will include us. It is expected for us to have someone to help within the house and one of their jobs will be to collect water from the nearby lake. We are fortunate to have the knowledge and facilities to clean our water, but Its shocking how many people in Tanzania drink from unclean water sources. Today we saw countless people collect their water from small pools or the lake, sharing their water source with many animals. From a Public health (and engineering) perspective there is much to be involved with so i’m sure we’ll be very busy over the coming months.

One thought on “Kome Island”