“I have a second wife on Kome island”. These were the words I (Simon) used to introduce myself to the congregation of 200 bishops and officers at the annual TAG leadership meeting. It was received with raucous laughter, and my stand-by translator turned to me and clarified the hilarity. What I said was “nyumba ndogo” which literally means “little house”, but casually refers to having another marital home.  Standing in front of a crowd of people is pretty daunting at the best of times but this really broke the ice.

Three of us, Joel, Laura and myself all travelled to Arusha last week, which is 12 hours drive from Mwanza. As missionaries for TAG we are required to attend these group meetings which can happen anywhere in the country. The road, as you can imagine is pretty treacherous. Its tarmac all the way, which is already an upgrade on the drive to Kome, but that in turn means the road is fast, and some people take it really fast! To combat this the roads agency have put vicious speed bumps through every village and regular radar traps.  So we planned to leave early to make up time in the dark,  with  quiet roads and no police. We made it in good time with no complaints from our other passengers, the assistant bishop and secretary from Mwanza south diocese.  The route from Mwanza to Arusha bypasses the Serengeti and then cuts through Lake Manyara and Tarangire National Park, so there’s some potential to see some game and we did see some zebra and wildebeest. There’s also some impressive scenery with mountains, coffee fields and forests.

We had timed our arrival to coincide with the opening ceremony on the Tuesday evening. The bishops had been there since Saturday but all the supporting officers were now arriving. The Archbishop was obviously encouraged to see our faces and very early on we were invited up the front to introduce ourselves to the congregation. Laura went first and did a fantastic job of introducing herself in Swahili after only a few weeks of lessons. I went next and dropped my clanger, and then Joel followed. We weren’t required to contribute anything more much to our relief! At one point the Archbishop invited anyone with a building project to move to the front for a blessing. Needless to say everyone went- buildings really are a high priority for churches here! 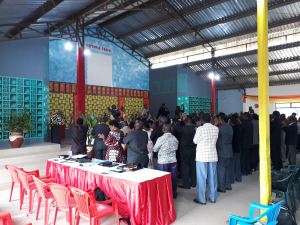 The following few days were a marathon of meetings – 8am to 8pm all in Swahili all on diocese related issues. The format was predictable, each diocese had prepared a report and then had 10 minutes to deliver it to the council. There was then a few minutes of questions and observations from the audience. There are more than 50 dioceses and about 10 departments (covering children’s ministry, students, development projects etc) and each one was prepared to give a presentation sometime over the four days. You could see from the reaction of the congregation when one report was particularly good (or shameful) and the council pulled no punches in the questions. Sometimes it was uncomfortable viewing! One diocese planted 74 new churches last year which obviously received much praise! Although we didn’t need to formally report at the meeting, all of our work in EI Mwanza is through the TAG churches and therefore impacts the reports of our respective dioceses. It was great to be there to support the new bishop of Mwanza West, Simeon, whose diocese covers Kome Island. He is a well respected pastor but the diocese is very new, less than a year old, but is already well formed and has good plans for the new year- watch this space to see how we will be involved.

We committed to staying for two full days of reporting, which was very hard work. I zoned out several times since the 10 minute timer made the speeches very rushed and understanding them impossible. On the Friday we had the morning to explore Arusha before heading back to Mwanza. Despite being a smaller city it is definitely a tourist hub, every other car is a safari car filled with tourists heading to the Serengeti, so we fitted in nicely. Arusha also sits under the shadow of the imposing Mount Meru. We took advantage of the shopping malls to stock up on things Mwanza falls short on- blue cheese, sprouts and raspberries.

All in all it was a good trip, we returned safely. We’ll probably be invited back next year and I’ll have to find something else to say to entertain the masses!

One thought on “Bishops and Blue Cheese”