It’s amazing that another year in Tanzania has flown by and this will be our third Christmas spent here. We inherited a number of children’s Christmas picture books from the previous residents of the house we live in and Reuben keeps asking how it can be Christmas if there is no snow! Tabitha laughs and adds ‘do they know it’s Christmas time at all?’! 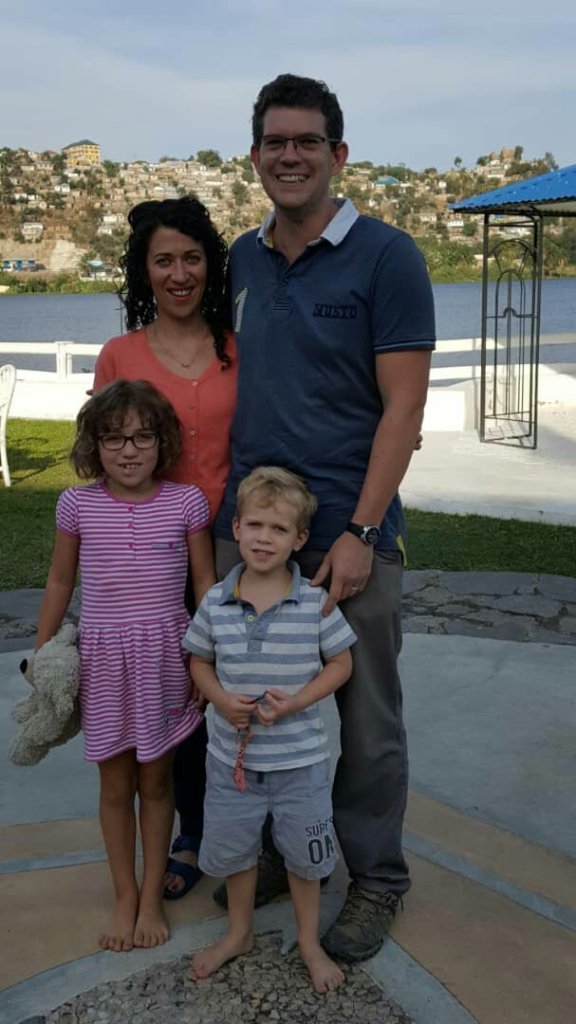 When we left for Tanzania we had a rough idea that it would take about three years for everyone to feel settled here and five years for us to feel like we’d really achieved something. Our previous experience of living in Africa gave us a sort of guide. Now we’re getting close to the three year mark I think it’s fair to say that everyone is pretty settled and life has found its new normal. Tanzania is definitely more normal for the children than the UK is and I’m sure, like last year, on our visit to the UK this coming year there will be lots of surprises and learning for the kids as they experience what life is like in the UK.

This year we have established ourselves more as home-educators. I don’t think we did much serious work in Tabitha’s first year of home-education and the steps to year one and two were quite gradual. This year she’s in year three and we’ve pushed ourselves to take the work a bit more seriously. This year, with Reuben starting Reception class, we decided to add a new, fun curriculum designed for his age. This serves as a sort of mid-morning break for Tabitha and both children have been really enjoying the rhymes, poems, singing and general creativity that the new curriculum has added. That said, I think she’s very happy to have a couple of weeks break over Christmas, and I think has earned it!

Some pictures of home school bliss, so that you can imagine it’s always like this…! 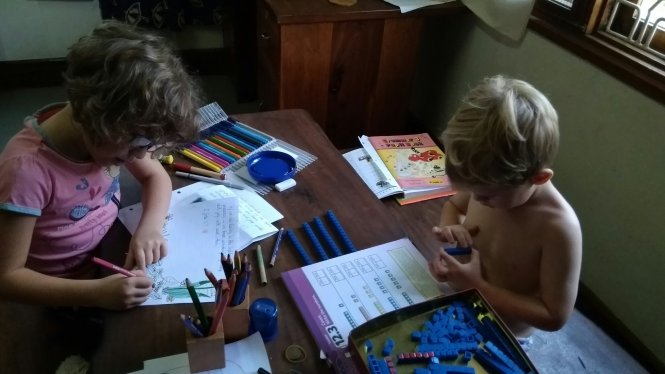 During this year our neighbours, who had spent many years in Tanzania, decided it was time for them to move on. This was a sad shift for us because we had become secure in the knowledge that people with so much local experience were no longer going to be right next door, they had also home educated their seven children! They had baled us out a number of times, like on one occasion when a truck had driven into our garden wall, knocking a big chunk of it down while we were on Kome. Our neighbours made sure our dogs were secure and that the wall was patched. They then liaised with the right people and the wall had been re-built by the time we arrived back in Mwanza! They also ran a weekly Bible study for young girls, which was the highlight of the week for Tabitha. And were generally awesome in every way.

It is well known in missionary circles, that while your friends leaving is often tragic, it also brings with it one blessing – you have the opportunity to buy their stuff from them! This is usually especially exciting if your friends are from North America – in general they have more and better stuff for you to buy than you can get anywhere else! It’s that awkward moment where they announce that they’re leaving and you cry and then through your tears claim whatever item of theirs you most covet! These particular friends owned a very nice, if very expensive piano.
For Christmas last year the children received a mini keyboard, which Tabitha showed an interest in playing and had began making a bit of progress on. We were blessed by receiving some money this year, especially from one family, specifically to enable us to buy the piano. This has been such a blessing over the past few months and the piano has been well used by a number of members of the family, who have begun making a bit of progress, from zero talent, to slightly above zero talent! This Christmas we hosted a Christmas ‘sing and play’ at our house for the missionary community in the general Mwanza region to come and share their musical talents and to sing some Christmas carols together. About 50 people came and it was such a blessing and nice to see the piano getting a work out!

This year our projects on Kome Island have begun taking different shapes. Our Community Health Educator, Gertrude, was working with us on Kome until the end of August. Gertrude really helped us during the early stages of our project mm in Dar es Salaam, and the time felt right for her to move to be with her sister there. We were visited by the Emmanuel International Canada and the International Directors at the end of August, this was also when Gertrude finished working with us. It was so lovely to see the way the community sent her off. She was given buckets of gifts of their farming produce and the women gathered round her to pray with her and send her off. Gertrude may, for many of the women, have been the first person who was able to talk openly with them about issues that were very personal to them and to help them make decisions that will enable to live healthier lives.

The majority of the funding for the Health Project, up until now has come from Team Hope, an Irish charity. The main part of this project is expected to finish in January 2020. With Gertrude leaving we were able to take on a couple of new members of staff to help get the project finished up. We have been so blessed to be joined by Emmanuel (who has the right name to be working with EI!) and Vicky. Each of them has been focusing on different parts of the project and each has complemented the other. Team Hope have made a strategic decision to not continue funding projects in Tanzania, this is because they want to focus their work in areas where they deliver Christmas Shoe Boxes and this is not currently planned for Tanzania. We have been spending quite a bit of time recently planning the next stage of the project and seeking funding in order to be able to continue the work on Kome Island. 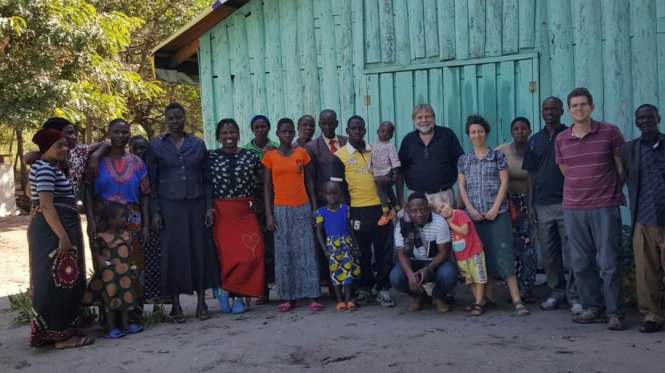 Picture taken outside Mchangani Church showing a couple of the Kome TAG pastors; some of the elders; members of one of our women’s groups; one of our international directors, Paul Jones, centre; and our new EI staff – Emmanuel, who is with Reuben and Vicky wearing the red wrap around her skirt:

This year we also received funding from Hockliffe Street Baptist Church, for a toilet improvement project. We were able to use this money to build a sanitary, safe latrine block for each of the four TAG churches on the island. We are currently using the remaining money from this donation to support community members to improve their home toilets. We have seen that sanitation is a major issue on Kome Island, so we are excited to take the project forward in this direction in the coming year.

As this year draws to an end we want to take the opportunity to thank those of you who have supported us this year. We appreciate the comments, likes, messages and parcels that we’ve received! We know many of you pray for us regularly and we appreciate that so much. We are also so thankful for those of you that have given financially either as one-offs or regularly. We do not receive a regular salary for working here in Tanzania and couldn’t do it without the donations given for our personal support. Many of you will know that we initially signed up to live here for three years and many of you agreed to support us for that amount of time. That first three year stint will be completed early in 2020 and we would like to continue working here for another two years and in order to do that we’re asking those of you that already support us financially to continue and for those of you that don’t yet give to consider doing so. We are currently falling a little short of the amount of money needed to keep us here, so if you are interested in giving please consider doing so. Please visit our giving page for details of how to give.

Merry Christmas from the Ewing family! 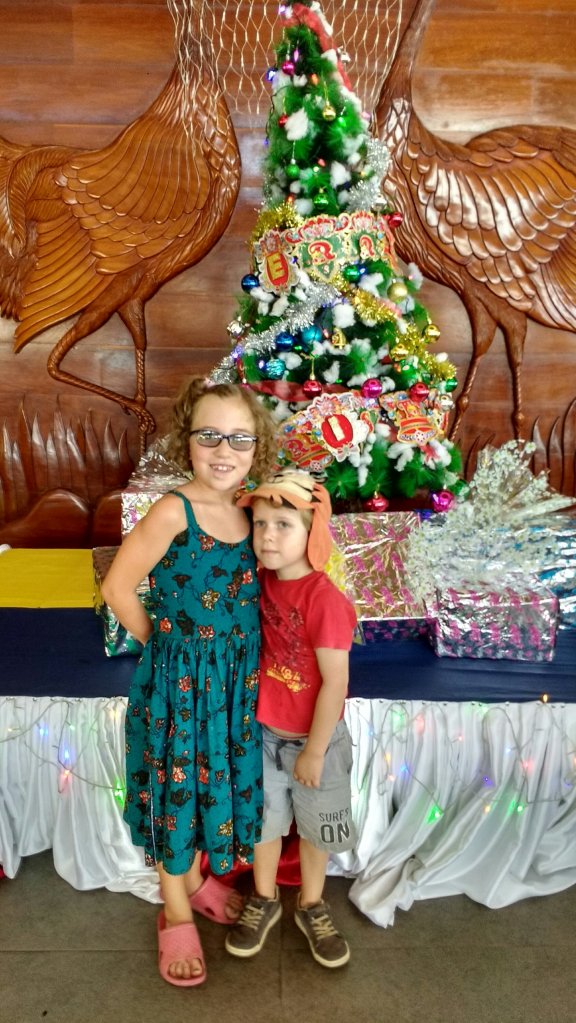 One thought on “Christmas 2019 update”